3 Days of History in Portsmouth & the Seacoast

Portsmouth boasts 400 years of history, culture, architecture and scenic beauty, which you can see all within easy walking distance. These activities can be comfortably spread over several days.

Start with a guided tour to get the lay of the land as our knowledgeable guides highlight the historic homes, trademark tugboats and working waterfront, vibrant Market Square, and colorful Prescott Park. You’ll hear stories about the rich and famous to the humble merchants and madams who had thriving businesses here. You may also hear about the brewers and politicians, fishermen and boat builders, writers, editors, and publishers that made Portsmouth the talk of the region in their day. You’ll find that the people who were born here, worked here, or moved here over the past three centuries weave a colorful cultural tapestry. Portsmouth was, and still is, a town full of characters.

● U.S.S. Albacore, a research submarine, designed by the U.S. Navy to test experimental features used in modern submarines.
● St. Johns Church
● The Gundalow, protecting the Piscataqua region’s maritime heritage and environment through education and action.
● Take a walk in Prescott Park, full of beautiful gardens and benches looking out on the Piscataqua River. (All America Select Garden) 1 of 15 in the country.
● Explore the Black Heritage Trail

Enjoy a lamplit stroll through our charming city streets including a stop at one of the many options for a sweet treat. If you’re in the mood for some live entertainment, look out for live music or catch a show at one of our local theaters! 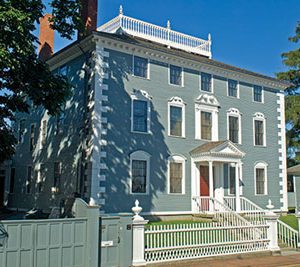 Explore 32 historic buildings on their original foundations in Portsmouth’s oldest neighborhood at Strawbery Banke, and meet the families who made the houses their homes over 300+ years of American history. Allow at least 90 minutes to cover the 10-acre site (tickets good for two days!)

Head out to Peirce Island, situated on the Piscataqua where you can see beautiful views of salt marshes, tidal pools, rocky cliffs and meadows. Enjoy activities such as swimming in the outdoor pool, strolling the riverside paths, and swinging on the playgrounds. Keep an eye out for the United States Naval Shipyard in Kittery, Maine. Portsmouth Naval Shipyard specializes in the overhaul, repair, and modernization of US Navy submarines.

Marvel at a show at the historic Music Hall, which opened as a Vaudeville theater in 1878 bringing a vibrant scene of arts and culture to the Seacoast. It’s now one of the most popular theaters in downtown Portsmouth and throughout New England.

Make your way back up 1B to Great Island Common at New Castle to see the beautiful Isles of Shoals just 7 miles off shore, and the remnants of Ft. William and Mary (Now Ft. Constitution). Check out Portsmouth Harbor Lighthouse and Whaleback Lighthouse, a historic lighthouse at the mouth of the Piscataqua situated between New Castle and Kittery, Maine. Take a photo through the infamous ‘frame’ donated by a local resident of New Castle!

Continue down Rt. 1B and make a stop at the historic Wentworth by the Sea Hotel & Resort, where the Japanese & Russian delegates stayed as the Portsmouth Peace Treaty was negotiated at the Shipyard. This hotel is so beloved that the people of New Castle saved it from demolition.

Make your way back to Portsmouth for dinner on the decks, or at one of the historic restaurants nestled on Ceres Street.

Black Trumpet Bistro: Formerly known as the Blue Strawbery, Chef James Haller opened the first restaurant on Ceres Street in the early 1970’s and laid the founding bricks of culinary destination that our city is today. Portsmouth, known as a lowly and even dangerous town transformed into a sought after dining experience among folks near and as far as Europe. Eventually, the restaurant turned into Lindberg’s, and now the Black Trumpet bistro owned by Chef Evan Mallett.

Oar House: Where it is thought that the tunnel entrance in the back of the dining room connected to Moffat Ladd house across the St. Mr. Moffatt and son Ladd were big into trading with the East Indian companies and islands with lots of goods coming in to Portsmouth. Read more here. Get your free Guide to the Seacoast!

This Week
This Month
This Year

Paid for in part by